There’s one really strong argument in favor of buying the ZenBook Flip S: the screen. This $1,449 2-in-1 has a 4K OLED panel, and it’s one of the best displays you can get on a 13-inch notebook.

OLED panels — which made a name for themselves in high-end TVs but are growing more popular in laptops as well — can deliver a stunning picture compared to IPS LCD displays. But all those pixels suck up a heck of a lot of battery, and companies sometimes slap them on laptops that can’t fully fill their power needs. That’s particularly true in thin-and-light 13-inch machines, which are working with really limited space for a battery. And it’s how you end up with releases like the Samsung Galaxy Chromebook, a gorgeous OLED device that can’t make it five hours on one charge.

The ZenBook Flip (which you should be able to buy sometime this month) isn’t quite that bad. It has a bigger battery than the Galaxy and lasts just long enough that life span isn’t a disqualifying factor. Ultimately, though, you’re still compromising on battery life for this screen quality — OLED laptops of this size are uncommon for a reason.

So, to start with the screen: it’s a stunner. There’s no glare, despite its glossy texture, so work in bright settings isn’t a problem. Pictures were vibrant, blacks were deep, and colors were bright — it makes MacBook Pro screens look cheap. In testing, the ZenBook covered 100 percent of the sRGB gamut and 100 percent of the Adobe RGB gamut, and it reached 452 nits at maximum brightness. That’s brighter than the OLED Spectre x360 and more accurate than some of the best creator-focused OLED laptops like the Gigabyte Aero 15. 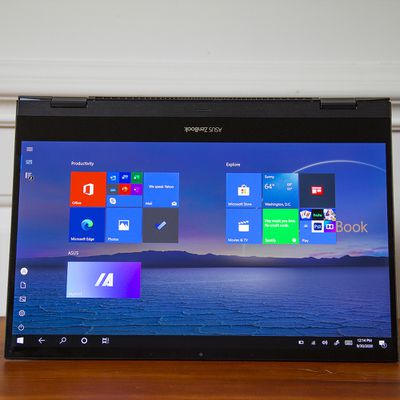 It isn’t hard to find 4K OLED screens in larger laptops — it’s the display quality combined with a compact convertible build that make the ZenBook Flip S such an ambitious device. It’s just 2.65 pounds (1.2kg) and 0.55 inches (13.9mm) thick. Design-wise, it’s a world away from the last major ZenBook Flip release, the UX370 (this model is the UX371) — Asus has brought the line into the modern era with sharper corners, smaller bezels (3.9mm on the sides), a sturdy build, and smooth premium finish. You may not even notice the copper accents or the modest keyboard backlighting unless you’re looking for them, but they round out a very nice professional look.

One thing to note is that the lid is a fingerprint magnet. Many models collect a smudge here and there, but this thing was covered in fingerprints about eight hours after I first opened it. Fingerprints are easy enough to remove, but it was a bummer to see on such a nice-looking machine nonetheless.

Like other ZenBooks, this one has a fold-under hinge that can lift the keyboard deck slightly off your desk. Unlike some hinges with this design, this one is very slight — I didn’t feel it digging into my legs while using the device on my lap. Asus says the hinge is “durability tested” for over 20,000 open / close cycles, and it feels sturdy enough.

Form transitions weren’t always seamless, though. The ZenBook sometimes attempted to switch to tablet mode when I was tilting it slightly to the side (in the laptop position). When I’d tilt it back upright, my windows wouldn’t all snap back to the same positions I’d had them in before.

Occasionally, the screen also didn’t switch out of tablet mode after I swiveled it from the tablet to the laptop position, and I’d have to redo the transition. This is an issue you’ll sometimes have with Windows 2-in-1s — it’s not unique to the Flip — but it can be a headache nonetheless.

Elsewhere, Asus has added an edge-to-edge keyboard and squeezed an extra column of keys onto the right side that includes Home, Page Up, Page Down, and End. (HP’s Spectres and Envys have a similar row). The keyboard is an absolute highlight for me — it is comfortable and quiet with a ton of travel, and I make significantly fewer errors typing on it than I normally do. That said, I have very small fingers, and folks with larger hands sometimes find this kind of layout a bit cramped.

Like other modern ZenBooks, the Flip S comes with Asus’ NumberPad 2.0. When you tap a tiny icon in the top right corner of the touchpad, an LED touch-based numpad pops up. (Swiping down from the top left corner also brings up the calculator app, which is handy.) The numpad works really well, and you can also use the touchpad to navigate and click around while it’s up — the ZenBook never mistook my swipes for number inputs or vice versa. It’s worth noting that the touchpad isn’t quite as comfortable of a location for data entry work as the right side of the keyboard, but it’s still the closest thing you’ll get to a numpad on a laptop of this size.

The port selection is fine, except that there’s no headphone jack. Asus says it removed that in the name of thinness, and the Flip does ship with a dongle. But plenty of the ZenBook’s competitors (including the OLED Spectre x360, which is only a tiny bit thicker) have been able to squeeze one in. It’s also missing a microSD slot, which the Spectre also has. Apart from that, there’s an HDMI port, two Thunderbolt 4 USB-C ports, and one USB 3.2 Gen 1 Type-A. The laptop also supports Wi-Fi 6 and Bluetooth 5.0 — no LTE.

So all in all, a nice display in a nice form factor. What’s the catch? It’s battery life. The ZenBook Flip S comes with a 67Wh battery, which is huge for a 13-incher — and I’m not sure it would be usable with a much smaller tank. With my usual office workflow and brightness around 200 nits, I got just five hours and 15 minutes. Sure, you’ll probably get a better result if you set the screen to 1080p — but if you’re going to be doing that regularly, save your money and get a 1080p screen.

The Flip does charge up decently fast, though. My unit took 54 minutes and 29 seconds to get up to a 60 percent charge (during very light Chrome use on the Battery Saver profile).

The second compromise is on power. The Flip S is one of the first systems to be certified through Intel’s Evo platform, which is like Project Athena for the Tiger Lake generation. The Evo brand is meant to certify that a laptop provides a number of benefits customers want, including all-day battery life, quick wake time, fast charging, Wi-Fi 6, and Thunderbolt 4.

The Flip S comes with a quad-core Core i7-1165G7 with Xe integrated graphics, in addition to 16GB of RAM and a 1TB SSD (to my relief, it didn’t come loaded with McAfee or any other nonsense). Note, though, that this is a fairly low-power implementation of the 1165G7 — and in synthetic benchmarks, many reviewers have seen the chip fall behind its 10th-generation predecessors.

The ZenBook Flip S certainly won’t slow you down if you’re just using it for multitasking in Chrome, Slack, Zoom, and other productivity apps. (The bottom did get uncomfortably hot at some points during my testing, though the keyboard only got a bit warm). But this laptop isn’t the best choice for running demanding programs.

One thing that did surprise me was the audio. I wasn’t even planning to mention the speakers in this review because I just assumed they’d be as terrible as they always are in laptops this small. But the ZenBook sounds great — it easily has some of the best speakers I’ve ever heard in a laptop of any size. My music sounded like it was coming from all around the room, the percussion really hit, and the bass was even present (which is rare for laptop speakers). Couple that with the exceptional screen, and the ZenBook Flip S is really an excellent multimedia device. There’s probably no laptop I’ve tested this year, of any size or price, that I’d rather watch a movie on.

If you’re looking for a thin-and-light convertible with a premium look and an OLED screen, you’re largely going to be looking at this and the $1,799 Spectre x360. They’re both very nice computers with standout displays and not-great battery life. The ZenBook, for a few hundred less, is missing two important ports but does give you some of Tiger Lake’s new amenities, including Thunderbolt 4 and Xe graphics. (And it’s a bit thinner). Normally, since the ZenBook has the newest processor, I would say it’s the no-brainer choice.

Unfortunately, as we’ve seen from synthetic benchmarks, the Flip S is actually underperforming the 1065G7 (which is inside the Spectre) in multicore use cases (that is, tasks that leverage every available core). If you’re looking to do more intensive tasks like light gaming or multitasking in many different applications at once (or if you really value a headphone jack and microSD slot), the 10th-gen Spectre (or a non-OLED model with a more powerful CPU) will actually be a better buy if you’re willing to pay the premium. This will also depend somewhat on when the Flip S actually hits shelves, because there’s also an OLED Spectre x360 with the 1165G7 coming sometime this month, which Asus says will be “up to 34 percent faster” than last year’s model.

But if you’re someone like me who mostly needs a device for office work, Spotifying, emailing, photo organizing, and especially entertainment, you can probably save money and get the ZenBook because it’ll perform just fine. You’ll get a slightly brighter screen, better audio, and a handy numpad, too.

Photography by Monica Chin / The Verge