Ikea has shrugged off the impact of a second round of coronavirus lockdowns in Europe as “incomparably” less than the first, saying that this time it will be able to keep on producing its flat-pack furniture.

Martin van Dam, chief financial officer of Inter Ikea, the main company in the Ikea retail empire, told the Financial Times on Tuesday that sales were being hit by some stores being closed after a strong “old-fashioned school start” in September and October.

“This lockdown is incomparable to the first one. The big thing is we don’t stop production. There are slower sales, but there is not the inefficiency of the first lockdown,” he added.

Ikea was forced to give substantial financial help to some of its hundreds of external suppliers earlier this year to stop them going bankrupt and allow them to pay workers as lockdown restrictions in much of Europe and parts of China heavily disrupted its production.

The uneven lifting of the first lockdown strained logistics in Ikea’s supply chain whereas at present there was little of that, Mr van Dam said.

About one in 10 of Ikea’s stores are closed — in France, Israel, Ireland, Czech Republic, Slovakia, Belgium and the UK — but the effects have been mitigated by allowing customers to collect online orders from some shops. At the peak of Covid-19 in April, about three-quarters of Ikea’s 450 stores were closed — on average for seven weeks each.

The world’s largest furniture retailer has in the past few months asked suppliers to work extra shifts as pent-up demand from the first lockdown and an increased focus on home improvements by consumers working from their dwellings has led to a rebound in sales.

Mr van Dam said Ikea had given its suppliers loans, prepayments for goods and funded their working capital. “We had to go back to our suppliers and say — what can we do together to make sure that stopping your production doesn’t bring you into financial problems. We had to make sure they don’t go bankrupt. But now we’re asking more of them, especially our furniture suppliers, and in particular in storage and organise.” 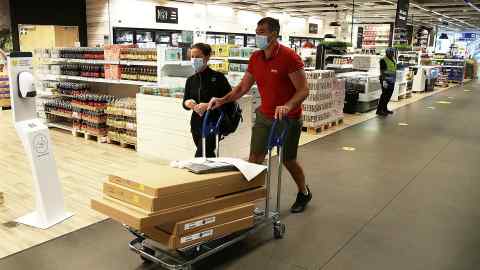 He said that consumers had changed what and how much they were buying. The average basket size had increased this year by almost a third from €93 to between €118 and €120. Its Pax clothes storage products were selling well while its food department was suffering.

“When stores reopened there was a tsunami of sales coming in. People want to improve their homes as they’re in them for most of the day. There’s been a super strong acceleration in demand and we’re producing like never before,” Mr van Dam added.

His comments came as Inter Ikea, the owner of the Ikea brand and concept, revealed its net profits rose 17 per cent to €1.73bn in its financial year to the end of August, even as revenues declined 6 per cent to €23.6bn.

Inter Ikea benefited from lower purchase volumes and prices from suppliers due to coronavirus as well as recruitment freezes in several businesses.

Mr van Dam said Ikea was ploughing most of its development money into making its online store as attractive as its physical shops. It opened its own ecommerce site in China earlier this year, adding to its first-ever test in selling on a third-party website, Alibaba’s Tmall.