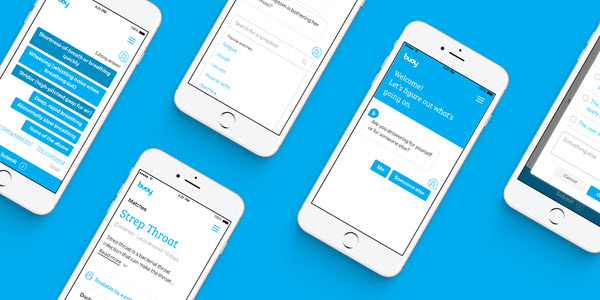 The Boston-based company designed a symptom checker that can also navigate users to a healthcare provider in their insurance network. Cigna, Humana and Optum are among Buoy’s clients, which also include Express Scripts, Banner Health, and the states of Virginia and Massachusetts.

For example, if a patient went through the chatbot late in the evening for a non-urgent situation, it could show them services in their area that are open the next day, CEO and Co-Founder Andrew Le said in a phone interview.

Buoy plans to use the funds to make the process of handing off patients to other clinical services, such as a telemedicine visit, as frictionless as possible.

Le started the company in 2013, before graduating from medical school. Working in the emergency room, he kept seeing patients coming in who had Googled their symptoms. Around that time, his dad got sick after a mini-stroke, but didn’t go to the doctor.

“For me, that was an emotional tipping point,” Le said. “I became obsessed with this idea that you have all of these front doors to healthcare — the emergency room, urgent care, telemedicine, and a proliferation of virtual options. … But it completely ignores the fact that if those are the front doors, the sidewalk to the front door is Google.”

He started working with experts in machine learning and clinical medicine to understand why symptom checkers don’t always work. They read thousands of clinical papers to create an algorithm that can rank answers in order of how statistically relevant they are.

“When we started to look under the hood, all of them were made of decision trees. Hard-coded questionnaires,” Le said. “People are so different from one another, even if they have the same diagnosis.”

For instance, if two people had bronchitis, one might have a fever and a phlegmy cough. But another might have no fever, or a dry cough.

“Even if we had same cough, same fever, the same sick contact… because you and I are different people, we describe our disease differently,” he added. “Because of that, decision trees cannot overcome that variability.”

In addition to its ranked system, Buoy’s symptom checker lets users see why they are being asked a particular question. The company also implemented a feature so it can “learn” if people report their diagnosis.

Buoy also started developing a Covid-19 triage tool back in January, that has since been adopted by several companies. The pandemic in general has drawn more attention to its business.

“Our day job used to be a three-times-per-year problem. Suddenly, it became a daily issue — do I go to the grocery store, go to work, see my parents?” Le said. “Healthcare navigation became a daily program which amplified our use case.”