Jing’an sits at the heart of Shanghai. It represents the essence of the history and culture of the city, home to century-old buildings, big-name attractions, glitzy retail malls and charming art galleries. Annual music and art events give the district a distinctive ambience. In this series, we showcase the highlights of Jing’an.

This year, 48 companies with offices and regional headquarters in Jing’an District attended the third China International Import Expo, a 26 percent increase over last year. Of them, top luxury company Richemont, fashion giant Inditex and international sports brand Yonex took part in the expo for the first time. French beauty giant L’Oreal, a third-time participant, signed memorandums of cooperation to participate in the expo for the next three years. There were many other highlights for Jing’an-based companies at the expo. 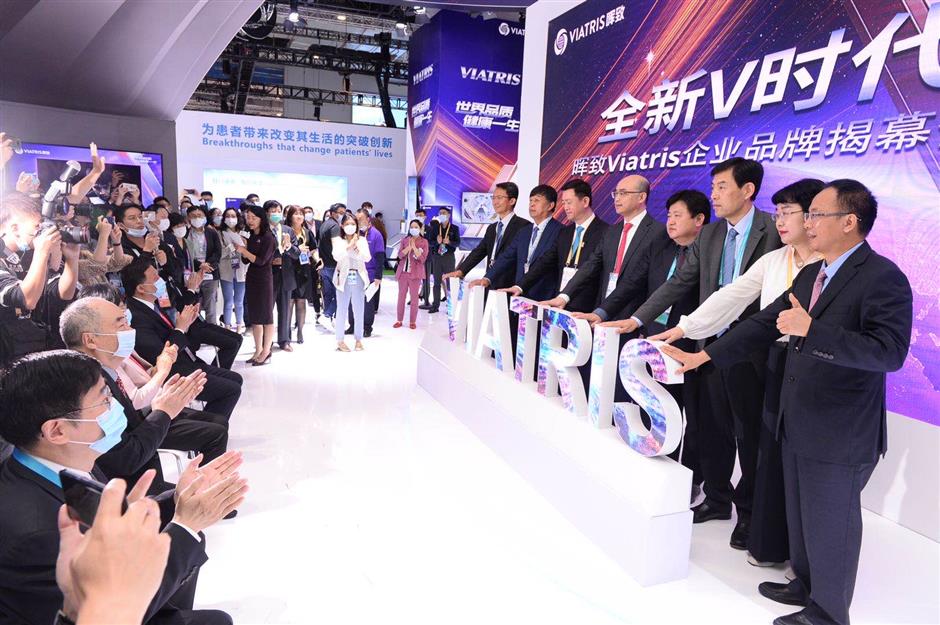 Viatris, a company created by the merger of pharmaceutical giants Mylan and Pfizer Upjohn, makes its Chinese debut. 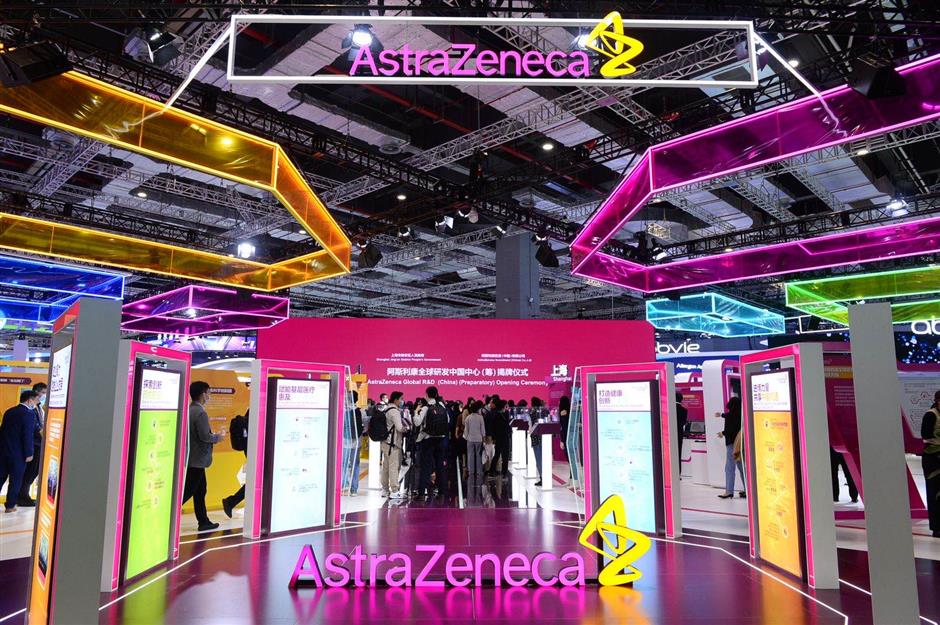 Jing’an hosted a conference to promote its biomedical industry at the National Exhibition and Convention Center on November 7.

During the conference, the Jing’an District government inked a strategic cooperation agreement with PricewaterhouseCoopers to strengthen information exchanges and promote economic development in the district.

Of the top 50 global pharmaceutical companies, 25 have a presence in Jing’an, including Pfizer, Sanofi, AstraZeneca and Bristol Myers Squibb.

Zhang Ying, deputy director of the Shanghai Economy and Information Technology Commission, said the commission will help attract major biomedical projects to Jing’an, deepen cooperation between researchers and hospitals and promote a digital upgrade for the industry.

During CIIE, Viatris, a company created by the merger of pharmaceutical giants Mylan and Pfizer Upjohn, made its Chinese debut. The new company has patented nearly 1,400 chemical compounds and biological products, and offers more than 20 drugs to treat allergies, mental disorders, liver diseases and more for the Chinese market.

Of them, Lipitor and Norvasc have been available in China for more than 20 years, and are two of the most popular drugs to treat cardiovascular and cerebrovascular diseases.

Pharmaceutical giant AstraZeneca unveiled a new research and development center at CIIE. The United Kingdom-based company signed a strategic cooperation agreement with the Jing’an District government during last year’s expo. The creation of the AstraZeneca Global R&D (China) grew out of that agreement.

According to company officials, Jing’an’s EDGE plaza will house the new R&D center. AstraZeneca will gather resources and talent to help create a biopharmaceutical industry cluster and innovation hub in Jing’an.

The company also plans to set up a sales division in the district. All told, AstraZeneca is expected to generate annual tax revenues of more than 200 million yuan.

The district government will continue to provide support and services to encourage more international companies to set up shops in Jing’an, said Yu Yong, Party chief of Jing’an.

This year, the company joined hands with the University of Oxford to develop a vaccine for COVID-19. Results of the final-stage trail are expected to be published by the end of this year.

With advanced technologies such as 3D imaging and automated modeling, dentists can produce ceramic restorations for teeth within 30 minutes.

CEREC has been used on more than 7 mil – lion people globally, including patients at Shanghai’s Huashan and Huadong hospitals, according to Huang Ling, sales manager of Dentsply Sirona. 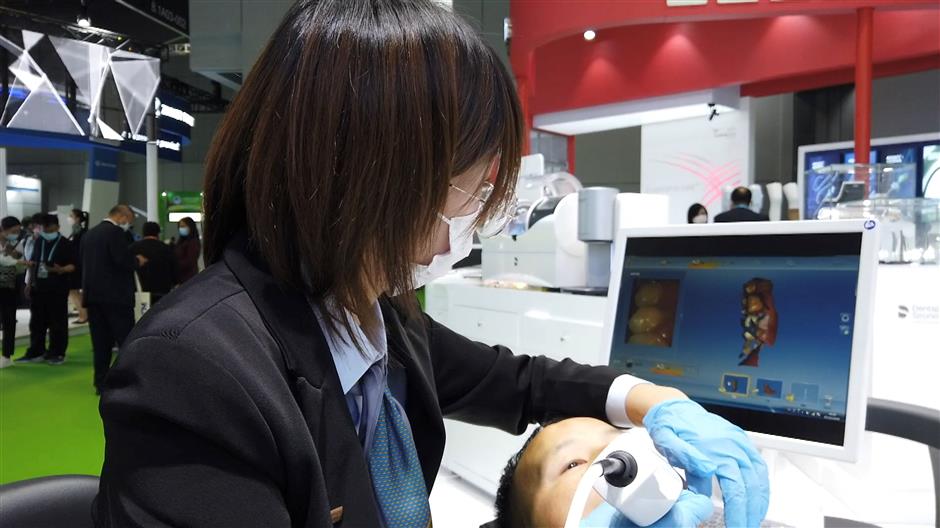 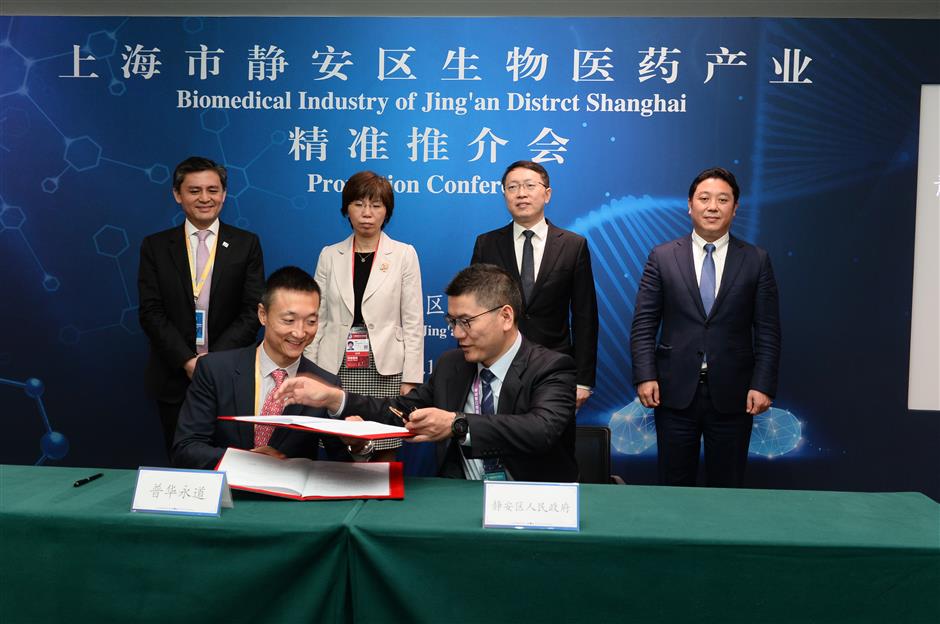 This year’s expo featured a special section for sporting goods and competitions in the consumer goods exhibition area that covered 7,300 square meters. It attracted many international sporting event organizers, athletic brands and sports technology companies, such as Nike, Decathlon, the NBA, Yonex and Nintendo Switch.

Stringing master Zhang Kui showed visitors the finer points of badminton-racket stringing with a new machine that was supposed to make its debut at this year’s postponed Tokyo Olympics. 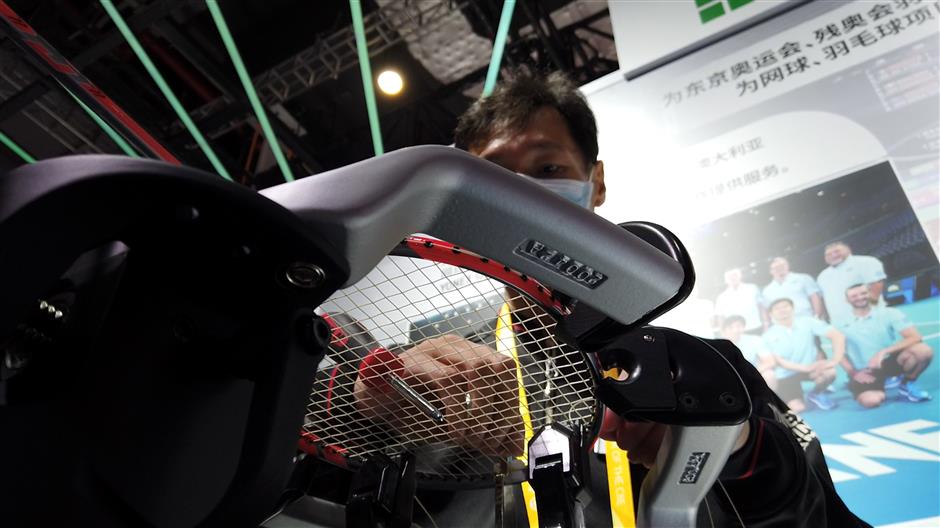 Swedish home furnishing retailer IKEA built a “sustainable home” at its CIIE booth. The 360-square-meter home, featuring a living room, bedroom, kitchen, bathroom and other living spaces, is made of recycled materials.

Materials recycled from last year’s expo were used to create interior decorations such as curtains and lamps.

Additionally, a new food storage and waste sorting system was displayed in the kitchen, as well as an energy-saving automated temperature sensor and controlling system.

Jin Di, public relations director of IKEA China, said the company has been promoting green and sustainable living for years, and was a CIIE “green development partner” for the second year.

on Nanjing Road W. set out to attract more repeat customers than its suburban Chinese locations.

Shoppers can scan a barcode on any of the store’s 3,500 items for product details and to place orders. The outlet has become an “Internet celebrity” site in Jing’an.

IKEA plans to add more stores in Shanghai, the Guangdong-Hong Kong-Macau Greater Bay area and in cities such as Fuzhou, Nanning and Kunming.

It will invest 200 million yuan in China to optimize product manufacturing, design and logistics. 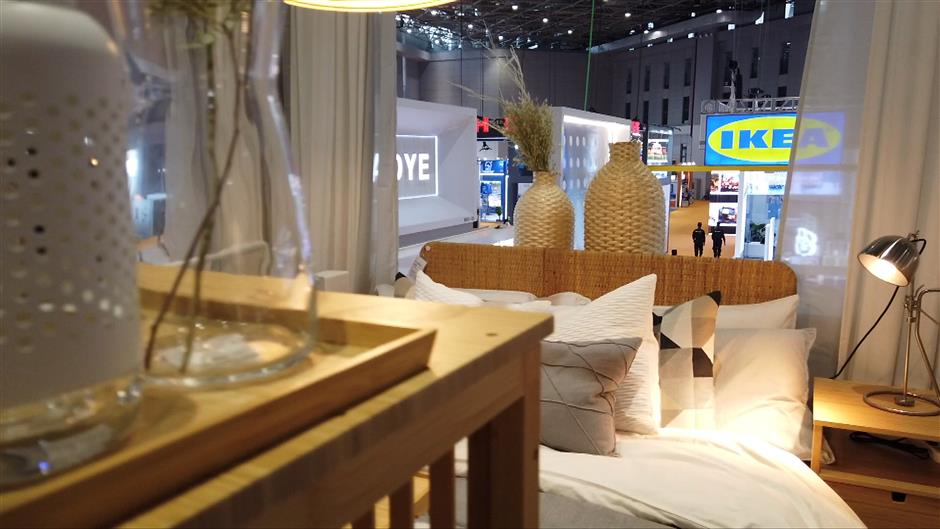 IKEA builds a “sustainable home” at its CIIE booth. 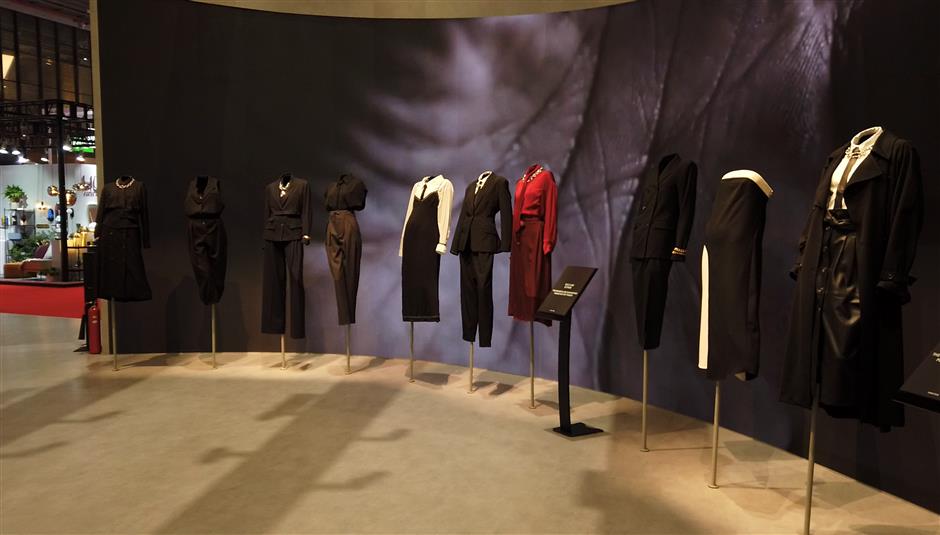 Over the six-day expo, Swiss watch and jewellery manufacturer Richemont displayed many of its world-famous brands, including Cartier, Montblanc, Vacheron Constantin and Piaget.

Guillaume Alix, CEO of Cartier China, said the brand hopes to deepen its bond with China and promote exchanges between Chinese and Western civilizations.

Richemont China CEO Jenny Gu said CIIE serves as an indispensable platform for multinational companies to promote their brands and facilitate their development in the Chinese market.

Spanish textiles manufacturer Inditex promoted four of its most popular brands — Zara, Zara Home, Massimo Dutti and Oysho — at the expo. The company displayed clothing, accessories and household products at its 504-square-meter exhibition booth to highlight the company’s concept of improving people’s quality of life.

Inditex officials said the textiles manufacturer hopes to leverage China’s rapidly growing online retailing and marketing trends. China has become one of the company’s biggest markets, which is leading the world in new marketing and sales concepts.

WeChat, Douyin and Xiaohongshu have become major promotional channels for Inditex and other global companies in China.

China is now French beauty giant L’Oreal’s second-biggest market, and the company is expediting the introduction of new brands, products, business formats and technologies in the country.

Zhang Fan of L’Oreal said with Perso, people use an app to take a photo and within seconds the robot can detect their skin tone and texture and produce the appropriate lotion.

A map of the city’s most popular destinations located close to Metro lines was a hit with CIIE attendees.

Xu Chenyao, who works for the city’s Metro operator Shentong, said people often ask her to recommend places to visit around town, so she decided to create a leaflet to better serve visitors. In it, she lists the city’s most iconic destinations, such as Shanghai Disneyland, Yuyuan Garden and Jing’an Temple.

“With this leaflet, visitors can locate Metro stations and enjoy the city’s flavor,” Xu said. “The last page of the leaflet is designed as a postcard that visitors can take it home as a souvenir.” 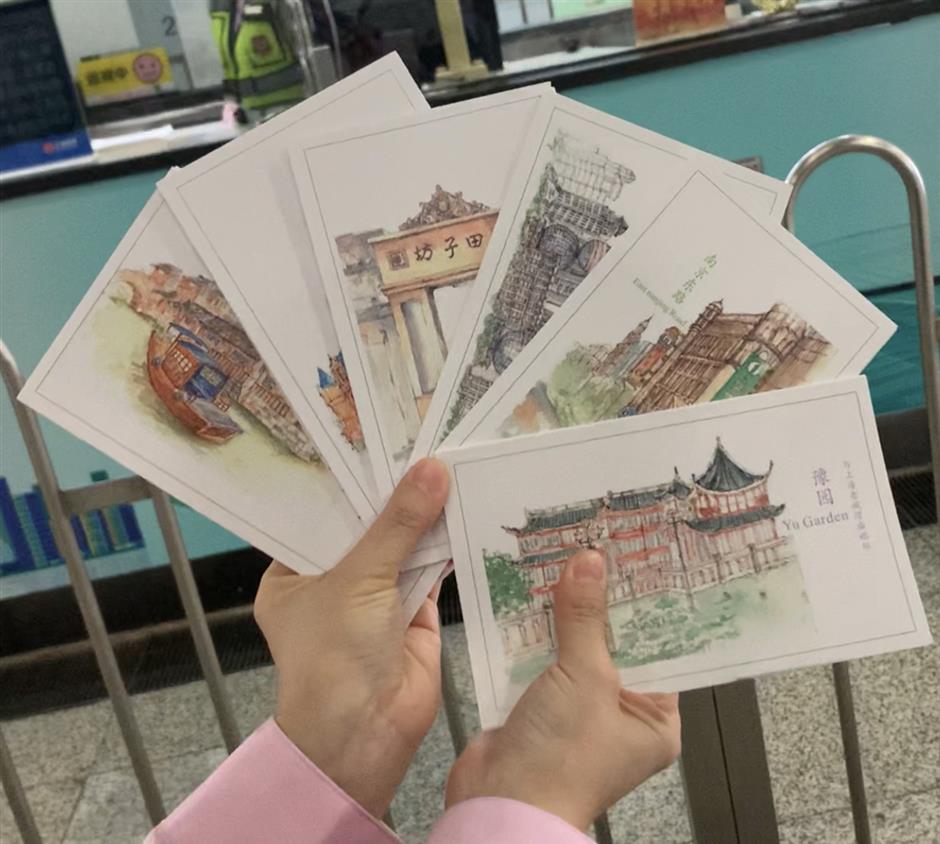