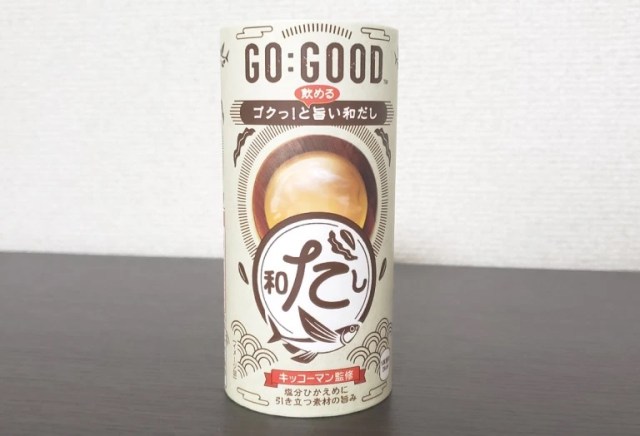 The piscatorial pause that refreshes?

In Japan, Coca-Cola doesn’t just make cola. Two of its biggest sellers in the country are its green tea and coffee lines, and now it’s added an even more unexpected beverage option: Japanese fish-stock soup that you drink straight out of the package.

Soup itself isn’t a brand-new segment for Coca-Cola Japan, as the company already offers individual-sized cans of corn chowder, shrimp bisque, and minestrone. But the Go: Good Gokutto Nomeru Umai Dashi (“Drinkable Dashi You Can Gulp Down”) is its first foray into Japanese-style soup, specifically the fish stock called dashi.

While at first glance it looks like it comes in a can, it’s actually a cylindrical paper package. After peeling off the seal you could sip straight from the tube, but for the purposes of this taste test we decided to pour ours into a cup so that we could see what it looks like (and so that we could convince ourselves that we’re fancy).

Starting with the aroma, it’s an enticing scent if you’ve spent much time around a traditional Japanese kitchen. While there’s a noticeable seafood aspect, though, it’d be going too far to say it smells “fishy,” since it’s far milder than you might expect.

The same holds true of the flavor. Made with bonito, kelp, and flying fish, the taste is complex, rich, and satisfying, but not so much that the stimulation overwhelms your taste buds.

Priced at 148 yen (U$1.40) in vending machines and supermarkets, and at a ridiculously low two calories per package, Coca-Cola’ Go: Good Gokutto Nomeru Umai Dashi is friendly to both your waistline and wallet. We’re not sure we’d recommend “gulping it down” like the product name suggests, but as something to sip and relax with, this is going to be a great choice this winter.