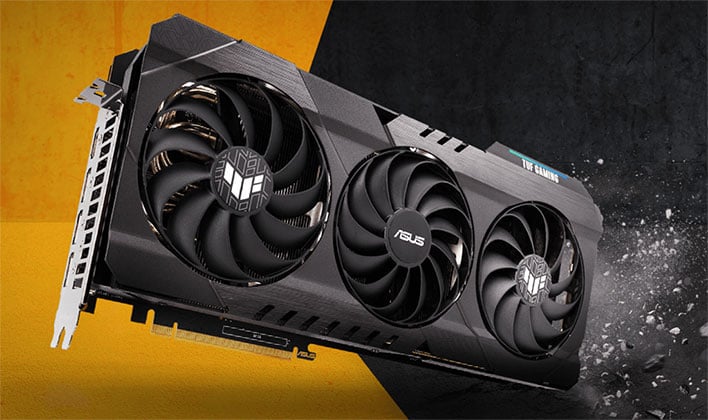 AMD today released its most powerful GPU ever, the Radeon RX 6900 XT, and right on cue its add-in-board (AIB) partners are starting to unveil custom designs. The first two out of the gate are ASRock and ASUS, though you can bet others will follow. In the meantime, let’s have a look at what the pair of AIBs have unveiled.
First, however, let’s quickly recap the reference specifications. The Radeon RX 6900 XT is AMD’s new flagship consumer graphics card based on its RDNA 2 graphics architecture, with a Navi 21 XTX GPU underneath the hood. It sports 80 compute units and 5,210 shading units, along with 320 texture mapping units, 128 render output units, and 80 ray tracing accelerators.

The reference blueprint calls for a 1,825MHz base clock, 2,105MHz game clock, and 2,250MHz boost clock. It also features 16GB of GDDR6 memory on a 256-bit bus, for 512GB/s of memory bandwidth. This all translates into 23.04 TFLOPS of single-precision compute performance, and 46.08 TFLOPS of half-precision performance.

Now, onto the custom cards…

Starting with ASUS, it has announced a TUF Gaming variant (TUF-RX6900XT-O16G-Gaming), with a trio of axial-tech fans on the front. ASUS says the fans on this model have been “enhanced with more fan blades and a new rotation scheme.” More specifically, there are 11 fan blades on the two outer auxiliary spinners, and 13 fan blades on the center one, which spins in a reverse direction compared to the other two.

“The barrier rings on the side fans have been slimmed down to allow for more lateral intake and to provide better airflow through the cooling array. The center fan’s extra blades and full-height ring provide boosted static pressure to blast air directly onto the GPU heat spreader. The fan design growth is specifically optimized for a massive new heatsink that features more fins and surface area than previous iterations,” ASUS explains.

Underneath it all is full-length, finned aluminum heatsink, covered with an all-aluminum shroud, reinforced frame, and a metal backplate for added durability. There is also a “MaxContact” heatspreader with a “super flat surface” to pull heat from the GPU. The whole contraption is designated as a 2.9-inch slot design, meaning it effectively takes up three expansion slots.

ASUS claims this results in a cooler and quieter running card. There is no mention of the clockspeed(s), though the model number suggests this is a factory overclocked card. Additionally, it sports two BIOSes, which is usually a telltale sign of a factory overclock as well (though that is not always the case).

Pricing and availability have not yet been announced. 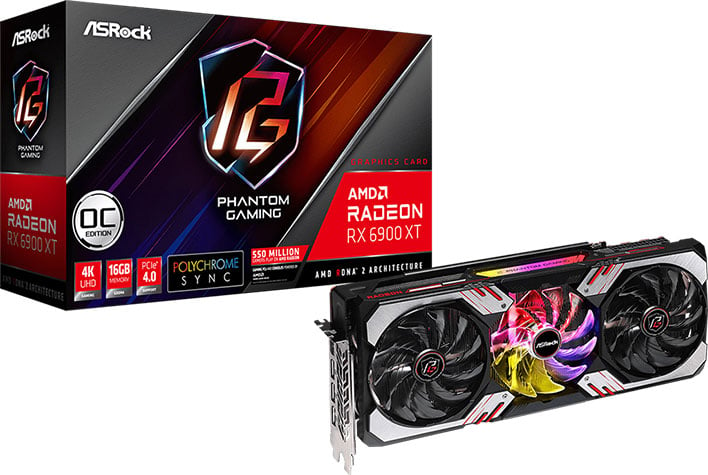 ASRock is also getting in on the custom action, with the Radeon RX 6900 XT Phantom Gaming OC Edition (RX6900XT PGD 16GO). To my eyeballs, it is basically a suped-up version of the reference cooler. Like both it and the ASUS model above, it sports three cooling fans—in this case, ASRock is billing them as “exclusive striped axial fans” with addressable RGB lighting.

It also features a brushed metal backplate for added durability. Beyond that, however, ASRock is still mum on the key details, those being the base clock, game clock, and boost clock. Each one is listed as “TBD” on the card’s product page. However, we know it will sport a factory overclock of some kind.

Pricing and availability have yet to be announced on this card as well.