Asus ROG Phone 4 will expectedly to be powered by the latest Qualcomm Snapdragon 888 chipset (codename Lahaina) with cores clocked at 1.80 GHz.

After the launch of Asus ROG Phone 3, ASUS Republic of Gamers (ROG) now seems to be working on a new flagship phone dubbed as ‘Asus ROG Phone 4’. The alleged phone has now been spotted on Geekbench revealing its chipset, RAM, and software.

As per the Geekbench listing spotted by Nokiamob, the Asus ROG Phone 4 will expectedly to be powered by the latest Qualcomm Snapdragon 888 chipset (codename Lahaina) with cores clocked at 1.80 GHz. The chipset will be coupled with 8GB of RAM. However, there could be other RAM variants as well.

For the software, the phone will run Android 11 operating system. The phone has scored 1081 in single-core and 3584 in multi-core benchmarks. On the GeekBench listing, the phone carried the model number ASUS_I005DA. 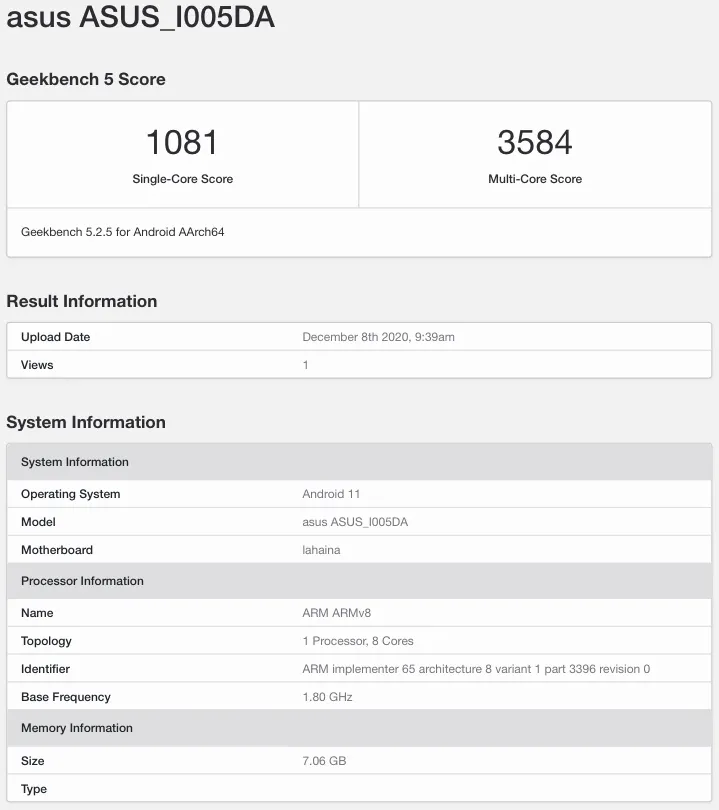 As of now, no more details about this upcoming Asus smartphone are known. We expect the phone to surface in more leaks in the coming days. Stay tuned to The Mobile Indian for more updates on this.

Meanwhile, Asus earlier rolled out a new update to ROG Phone 3 smartphone. The update comes with version number 17.0823.2009.98 and it optimizes system vibration and Enables VoLTE on BSNL for Indian users. The update also fixes Fixed OK google is difficult to wake up and cannot receive commands, Bypass Charging function occasionally not working when enabled and issue with left side misalignment of status bar icons after hiding the clock.