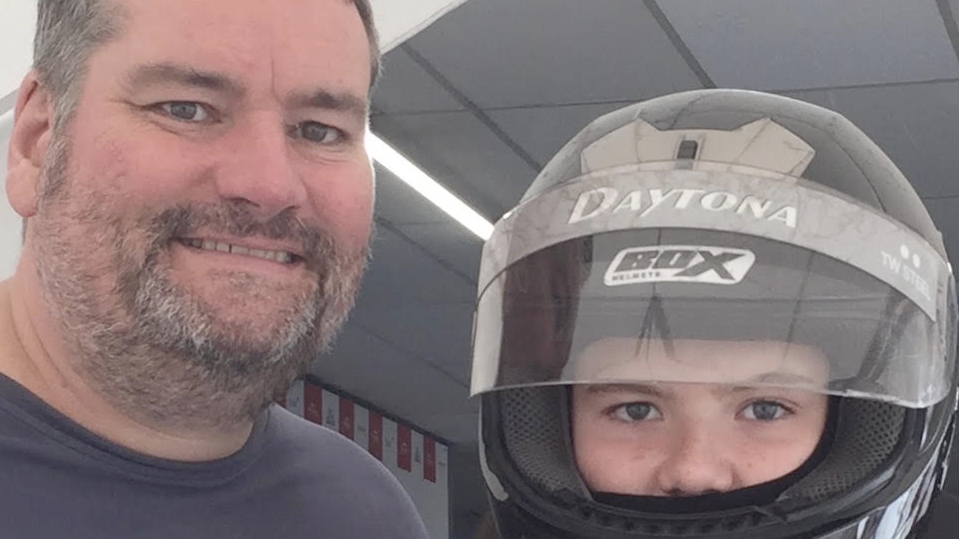 Owen and his father Neil used to be a regular at the go-karting track in Trafford Park.

The son of an Oldham father who suddenly passed away back in August 2019 says he’s now dedicating his go-karting career to his memory.

14-year-old Owen Harrison Lloyd used to go go-karting with his dad, Neil Andrew Lloyd, at Daytona in Trafford Park every weekend after his dad spotted his talent a few years earlier.

However now the teenager is racing in memory of Neil and is looking for sponsorship in order to keep his driving dream and that of his late father alive.

Owen’s mum and local author Elaine Lloyd thinks her son could be a future Formula One World Champion, following in the footsteps of a certain current great and is appealing for companies to get involved.

“Now’s the time to get your company logo advertised so the next Lewis Hamilton can fulfil all his goals and dreams in life.”

“Go Karting has been the answer and solution to Owen’s mental health at present after losing his close buddy and guide in life.”

Owen is not the only member of the family turning their hand to things other than school work. The teenager’s sister, 10-year-old Holly Lloyd has been creating beautiful fluffy toys for her friends, family and teachers in the community.

She’s also been raising money through selling them outside Tesco in Failsworth will all the money going to The British Heart Foundation.

Any business who would like to sponsor Owen Lloyd and his go-karting can get in touch with Elaine at elaine.lloyd@hotmail.com.

Do you have a story for us? Want to tell us about something going on in and around Oldham? Let us know by emailing news@oldham-chronicle.co.uk , calling our Oldham-based newsroom on 0161 633 2121 , tweeting us @oldhamchronicle or messaging us through our Facebook page. All contact will be treated in confidence.