As shoppers line up outside malls and retail outlets in Winnipeg, some uncertainty remains about how provincial public health guidelines are being applied to malls and large retail outlets.

Outside the Ikea outlet on Sterling Lyon Parkway, a line with dozens of people snakes around the front of the building — a familiar sight since the province relaxed code red restrictions across most of Manitoba last month.

“I got here earlier today and I waited for 20 minutes. Inside, the store is not too busy,” said Harrisson Kim, who left the store after buying a shelf and some plants.

While inside the store might not have seemed busy to Kim, it can get busy outside.

“I left on Saturday because people were crowding,” said Nicole Barker, who waited 12 weeks to come to the store to buy curtain fabric and a rod.

“I had somebody where I could elbow them behind me. No one was respecting the two metres. So I left, then I thought it might be a bit easier during the week, everyone is back to work … but I guess not, hey?”

Barker worried she might receive a fine if she wasn’t able to maintain distance from the other people in line.

“I don’t know if an officer comes by, will I get the ticket, meanwhile I’m trying my best to distance?” she said.

Manitoba COVID-19 enforcement officers handed out 56 tickets last week — more than half of which were given to people not following gathering rules.

Only two tickets were given to businesses — a massage parlour and a hair salon.

WATCH | COVID-19 enforcement, and the grey areas around retail: 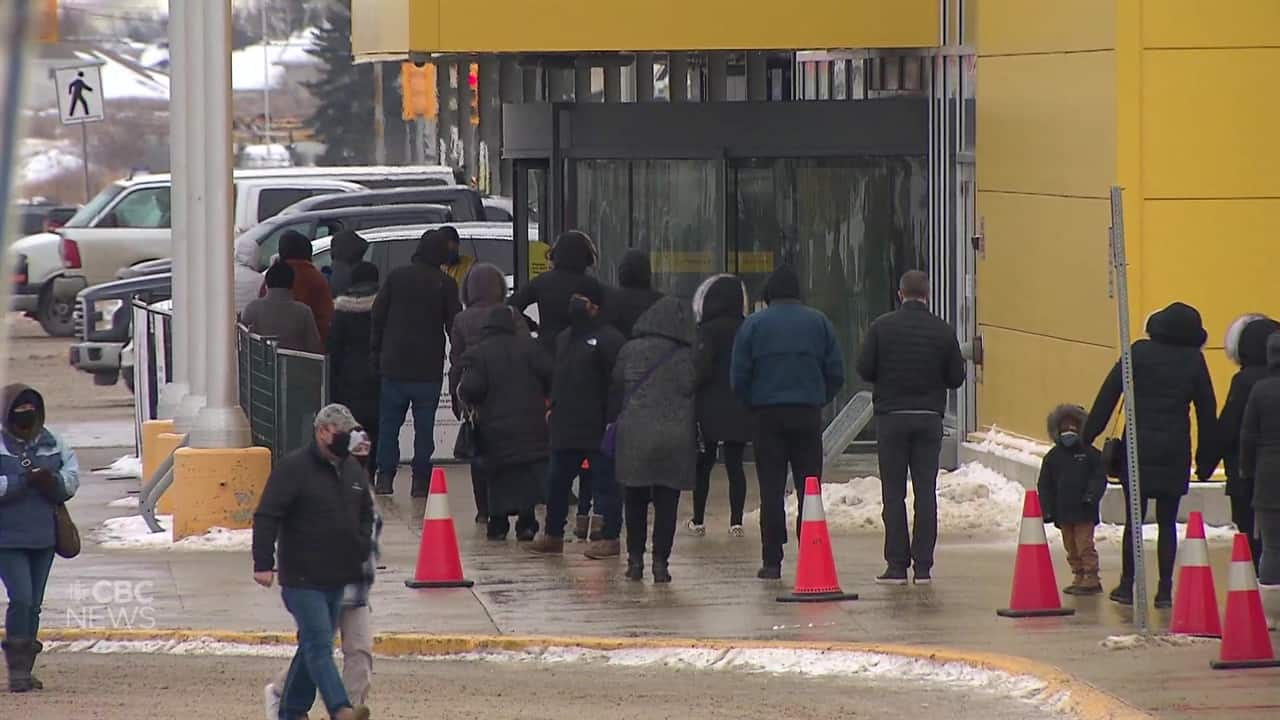 56 people have been slapped with COVID-19 enforcement fines last week and most have gone to individuals for having big gatherings. But when it come to shopping, there are some grey areas. 2:34

The province says it has worked with malls to come up with a safe number of shoppers. It means hundreds of people can be there at once.

A spokesperson for Ikea said its current capacity is set at 250 people.

CBC News reached out to several Winnipeg malls to ask what their capacity was, but not all of them agreed to share that information.

Sandra Hagenaars, general manager at Kildonan Place, says the current maximum capacity is 650 people, and staff are doing a good job tracking shoppers inside, but there’s less surveillance outside.

“They peek their heads out, they step out,” said Hagenaars. “We have some outdoor staff who are cleaning the sidewalk, taking the ice down. If they see any issues they’re supposed to let us know.”

But Hagenaars says she goes out and checks for herself, and she’s impressed with what she sees.

“We have all learned that six-foot rule. I bet you I could walk down that line with a tape measure and everyone would be six feet apart.”

That doesn’t include Canadian Tire, Shopper’s Drug Mart, GoodLife Fitness, Co-Op and McNally Robinson, which all have exterior entrances.

“Security is counting patrons in the common area as they do their rounds. All counts have been well within our occupancy limit,” Bialek said in an email statement.

Peter Havens, general manager for CF Polo Park, wouldn’t divulge the mall’s capacity limit, but the mall has an online tracking system on its website that indicates how busy the mall is at any given time. The system has three levels: “not too busy,” “moderately busy” and “busy.”

“At this time we are not sharing the capacity limits with the general public and have worked with our public health and fire inspector partners to ensure we are in full compliance with the orders,” Havens said in an email statement.

“We know from retail, even before restrictions were put in, that it was a lower-risk environment,’ said Jazz Atwal, acting deputy chief public health officer.

“We didn’t see much transmission on the retail side, although it did happen here and there. There has to be that distancing to occur. That is something that is paramount in all of this.”

Enforcement officers handed 42 fines of $1,296 to individuals for “various offences” from Jan. 25-31, the province said in a news release Tuesday. Of those tickets, 31 were issued to people who gathered in homes or exceeded the five-person limit outdoors.

In another development, another 14 tickets were issued to people who did not wear a mask inside a public place, the release said. The fine for not following the mask mandate is $298.

Officers have issued 2,758 warnings and 899 tickets since enforcement began last April, resulting in more than $1.2 million in fines, the release said.

Manitobans are urged to follow public health messaging, such as proper hand hygiene, staying home when sick, practising physical distancing and wearing a mask when inside public places.

Anyone who wants to report compliance and enforcement issues can do so by visiting manitoba.ca/COVID19 and completing the reporting form, or calling 204-945-3744 or (toll-free) 1-866-626-4862 and pressing option three on the call menu.