Brokerages predict that Cisco Systems, Inc. (NASDAQ:CSCO) will report sales of $12.58 billion for the current fiscal quarter, Zacks reports. Seven analysts have issued estimates for Cisco Systems’ earnings. The lowest sales estimate is $12.51 billion and the highest is $12.68 billion. Cisco Systems reported sales of $11.98 billion in the same quarter last year, which indicates a positive year-over-year growth rate of 5%. The business is scheduled to announce its next earnings report after the market closes on Wednesday, May 19th.

According to Zacks, analysts expect that Cisco Systems will report full-year sales of $49.17 billion for the current financial year, with estimates ranging from $48.71 billion to $49.42 billion. For the next fiscal year, analysts forecast that the firm will report sales of $50.87 billion, with estimates ranging from $50.34 billion to $51.59 billion. Zacks’ sales averages are a mean average based on a survey of sell-side analysts that cover Cisco Systems.

Cisco Systems (NASDAQ:CSCO) last announced its quarterly earnings data on Tuesday, February 9th. The network equipment provider reported $0.79 EPS for the quarter, beating the Zacks’ consensus estimate of $0.76 by $0.03. Cisco Systems had a return on equity of 32.64% and a net margin of 21.76%. The firm had revenue of $11.96 billion during the quarter, compared to analysts’ expectations of $11.92 billion. During the same quarter last year, the firm posted $0.77 earnings per share.

Millionaire Wall Street Legend Urges Americans To Get Out Of CASH before April 27th.

The firm also recently announced a quarterly dividend, which will be paid on Wednesday, April 28th. Investors of record on Tuesday, April 6th will be given a dividend of $0.37 per share. This represents a $1.48 annualized dividend and a yield of 2.85%. This is a boost from Cisco Systems’s previous quarterly dividend of $0.36. The ex-dividend date of this dividend is Monday, April 5th. Cisco Systems’s payout ratio is presently 49.32%.

Cisco Systems, Inc designs, manufactures, and sells Internet Protocol based networking and other products related to the communications and information technology industry in the Americas, Europe, the Middle East, Africa, the Asia Pacific, Japan, and China. It provides infrastructure platforms, including networking technologies of switching, routing, wireless, and data center products that are designed to work together to deliver networking capabilities, and transport and/or store data.

Featured Story: What is an economic bubble? 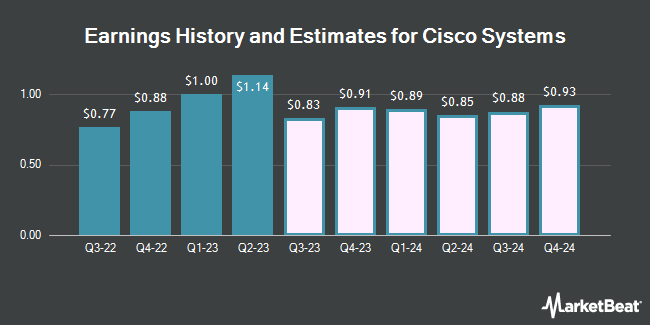 Despite their disagreements (real or imagined) on almost everything, Democrats and Republicans alike love infrastructure projects. These are easy wins for Congressional leaders seeking re-election. And they typically spur job creation, which contributes to economic growth.

With that in mind, it’s ironic that, in the last four years, the United States Congress did not pass an infrastructure bill.

Nevertheless, even with (and maybe because of) the gridlock that looks to be in the country’s future, the infrastructure looks to be on the front burner again. The economic recovery is still far from complete. Unfortunately, neither are America’s roads, energy grid, telecommunications systems, and the like. That means that it would seem like a good policy for a Biden administration to look at an infrastructure bill.

Biden will be under pressure to endorse the $1.5 trillion infrastructure package that the Democrat-controlled House of Representatives passed in July. But the package may need to be tweaked a bit since it currently includes climate change initiatives that have kept the bill from advancing through the Senate.

However, it appears that the economy will need some significant juice after whatever this winter brings in terms of the virus. And if calmer heads prevail (we can always hope), there may be a major infrastructure bill to stimulate job creation. And we’ve identified seven stocks that should bear watching if this comes to pass.

View the “7 Infrastructure Stocks That May Help Rebuild America”.