Asus has recently launched the refreshed version of the ROG Zephyrus G14 in India. With the new refreshed model, the laptop brings some improvements and a better hardware inside. It is an even more powerful machine and it has a lot to offer for the price. But is it a laptop that you should pick? Let’s find out in this review.

Asus ROG Zephyrus G14 comes in various configurations. The unit we received for review is powered by the AMD Ryzen 9 5900HS CPU. It features a 14-inch WQHD IPS panel with a 120Hz refresh rate. The laptop packs in 16GB of RAM and 1TB M.2 NVMe PCIe SSD. For graphics, it relies on the Nvidia RTX 3060 with 6GB of VRAM.

While the Asus ROG Zephyrus G14 is targeted towards gamers, the company still managed to keep it relatively portable. The laptop manages to weigh just under 1.7kgs. Even with a 14-inch display, the company was able to use a chassis that is close to a 13-inch laptop thanks to the minimal bezels around the display. 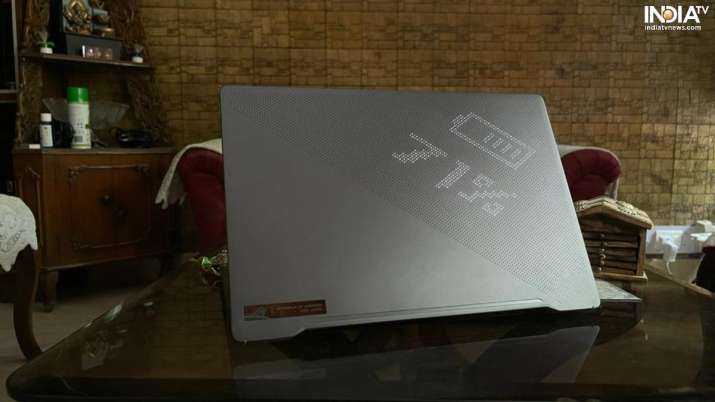 The weight distribution was also done well and I was able to open the laptop’s lid using just my index finger. It also comes with the ErgoLift hinge that basically elevates the laptop when kept on a table. It improves the typing position as well as allows the hot air to pass through the bottom vents.

One of the major complaints I had with the last year’s ROG Zephyrus G14 was the lack of a webcam and looks like we still dont get it with the refreshed models. However, it makes sense as most gamers do not require one and the ones who stream anyways opt for an external one.

The laptop also comes with a fingerprint sensor placed conveniently on top of the power button. During my time with the ROG G14, I enjoyed avoiding the hassle of entering my password manually every time.

One of the major selling points of the ROG G14 has to be the introduction of the AniMe Matrix. Most ROG laptops feature the ROG logo on the front plate with RGB or Red light glowing it. While that looks cool, the AniMe Matrix on the G14 takes it one step further. The dot matrix display on the front plate allows you to show more than just the ROG logo. 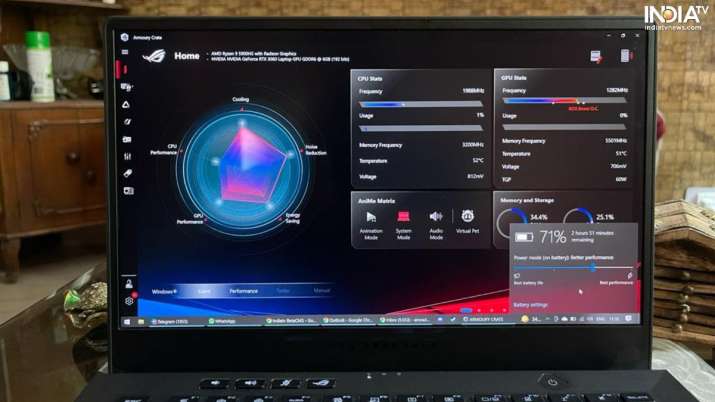 The AniMe Matrix is customizable using the company’s Armoury Crate software. From showing time and battery percentage to using your own logo on the front plate, you get to play with a plethora of options. One can even use a GIF that will play on a loop.

In terms of the build quality, the chassis is made out of magnesium alloy and does not have much flex to it. It gives you a certain level of confidence and does offer a premium in-hand feel. The front plate, as well as the bezels around the screen, are made out of plastic and the screen does flex a bit. 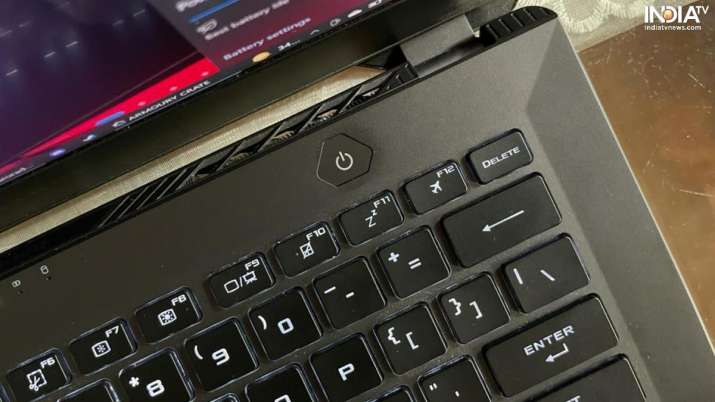 In terms of the placements, the ROG G14 sports two USB Type-A and one USB-Type C port on the right side along with a cooling went and the Kensington lock. The left edge of the laptop sports the DC charging port, an HDMI port and a 3.5mm headphone jack. There is also another USB Type-C port on the right side, which can also be used for USB PD charging as well as DisplayPort 1.4.

Asus ROG Zephyrus G14 (2021) comes with a 14-inch WQHD 120Hz IPS display. While selecting the variant according to your needs, you can even settle for a FullHD panel model. Last year, the G14 buyers had to make a choice where they would either get a 120Hz 1080p panel or a 60Hz 1440p display. Asus understood that most people wanted both a high resolution as well as a high refresh rate and that is why the G14 (2021) buyers can get 120Hz refresh rate on both 1080p as well as 1440p configurations.

As for the panel itself, it is quite sharp and crisp. There are minimal bezels around the display providing an immersive content consumption experience. With the 120Hz high refresh rate, I was able to have a much smoother experience while gaming.

On the audio front, the Asus ROG Zephyrus G14 (2021) sports two bottom-firing speakers and two top firing tweeters making for a set of four speakers in total. When compared to other gaming laptops in the segment, the speakers get quite loud and are clear for watching TV shows. 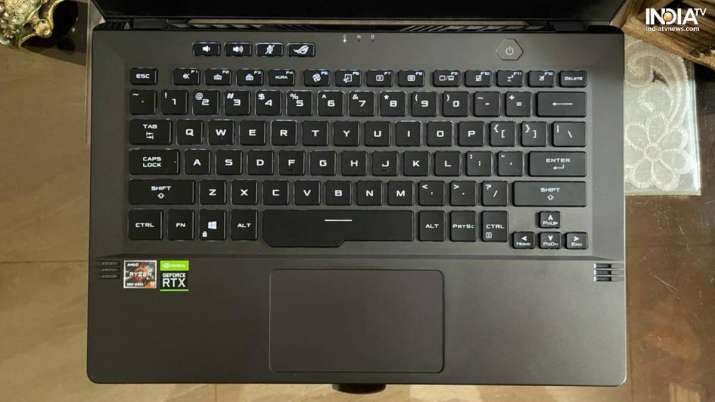 Asus ROG Zephyrus G14 has a great keyboard with a decent amount of key travel. While these keys do not come with RGB lighting, I feel white backlight makes the laptop look subtle and it is something you can carry even to your office without grabbing unnecessary attention. It is also worth noting that compared to the last year’s model, the new ROG G14 gets a better and more evenly distributed lighting on the keyboard.

As for the trackpad, Asus takes advantage of the Windows Precision drivers making gesture controls on Windows 10 seamless. The trackpad itself is smooth and it is one of the best I have used on a Windows laptop.

Whether you are a creator or a gamer, if you are looking to buy this laptop, the major area you have been focusing on the performance. That is also where Asus wanted to excel. The Zephyrus G14 is powered by the Ryzen 9 5900HS paired with an Nvidia RTX 3060 mobile GPU.

These specs are not only impressive on paper but also offer a great experience in the real world use case scenario. I played a couple of games on this laptop including Gears 5, Counter-Strike: Global Offensive, Valorant, PUBG, Witcher 3 and GTA V. The laptop was able to run all of these titles above the 60fps mark even with all the graphics settings set to Ultra or High.

However, the laptop did show signs of thermal throttling. I was sitting in a room with the Air Conditioner turned on and the laptop still started to drop FPS on demanding titles after continuous gaming. I played Gears 5 at 1080p with maxed out settings and I was initially getting 110-120fps. But after about 45mins of gameplay, the FPS dropped down to around 75-90fps.

This clearly shows that even though the laptop packs in a lot of power it is not the best at keeping everything cool. 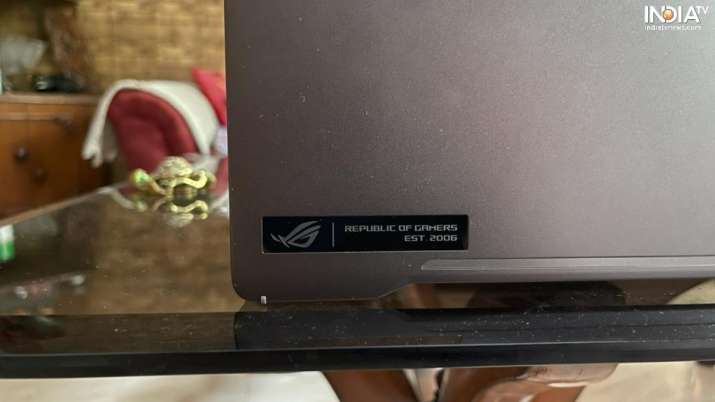 In terms of regular usage, I had no problems having three windows of Google Chrome open with at least 10-12 tabs on each window. I even had a couple of apps running in the background including WhatsApp, Slack, Spotify, Steam and Microsoft Word.

Asus ROG Zephyrus G14 (2021) managed to impress me in this area. During my time with the machine, I was easily able to stretch it to around 5-6 hours of usage. My usage consists of using the web, lots of typing and listening to music at all times.

For charging, the laptop comes with a 180W power brick that can fast-charge the laptop from the dead to full in less than two hours. Asus has also given the option of charging it via the USB Type-C port. However, it can intake only 65W of power resulting in slower charging speeds.

Overall, the Asus ROG Zephyrus G14 (2021) is a great package for the price. However, considering that the laptop builds a lot of heat and it gets to a point where thermal throttling becomes an issue, you should either use it with a proper desk setup or just simply look for other options.